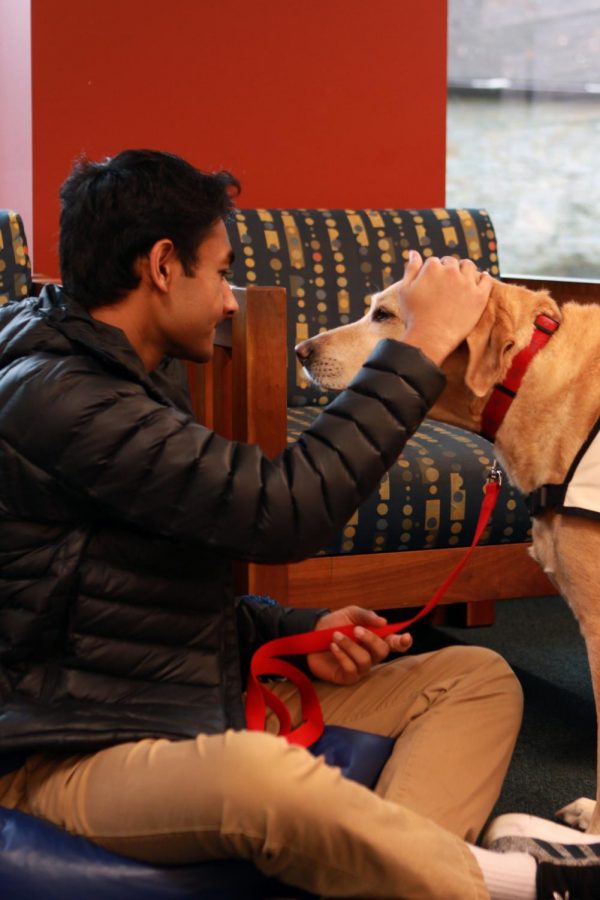 Senior Hari Ganeshan pets his dog Copper, a trained therapy dog. They volunteered for “Paws to Read” at the Carmel Clay Public Library on Nov. 23.

While everyone melts when they see a cute dog in the hallway, many don’t realize the number of extra responsibilities taken on by the canines in order to enable them to roam the halls of CHS. The domesticated animal is not only a friendly neighborhood pet but has also found another call of duty: service.
Hari Ganeshan, owner of therapy dog Copper and senior, is among the few who know first-hand the effects of therapy dogs.
Ganeshan said Copper is not much different than a normal pet.

He said, “She does all the normal things a dog would. In the way of volunteering, she has that distinction of a service dog enabling her to help people.”
Social worker Sarah Knoop, who works with “Love on a Leash,” a nonprofit organization dedicated to providing an avenue for volunteer pet therapy teams to engage in animal assisted therapy, has brought in therapy dogs, including Copper, during mental health awareness week for the past few years.
“A lot of students can identify that their pet is one of the things that makes them feel better on a regular basis. Bringing in therapy dogs seemed like a natural way to brighten up your day and give some stress relief,” Knoop said.
Therapy dogs are not the only dutiful canines within CHS walls. Twenty-one year old canine handler and Student Resource Officer, Scott Moore said police dogs that are prevalent both within and out of school are a very valuable part of law enforcement.
The dogs used within schools are intended to sniff out narcotics.
Moore said, “My first dog was taught to scratch, bite, and try to get into the place drugs are located. My other two dogs were called passive, where they were trained to sit when they could smell drugs.”
Moore said dog’s noses are 800 to 1,500 times stronger than humans; therefore, five dogs could clear this school within an hour, where it would take police officers at least 24 hours to search the building.
Moore also said police dogs go through nine to 12 weeks of basic training, unlike therapy dogs who are often acclimated within four weeks.
Ganeshan said, “During those four weeks of therapy training, you have to make sure the dog won’t take food from strangers if you’re in an assisted living home, will be very patient and be able to sit still for long periods of time.”
Moore also said, “Dogs within the department are patient and very loyal. You can yell at your dog and it will still love you and still want to work. People aren’t like that.”
The loyalty of canines is what makes them suitable for therapy.
Ganeshan said, “I feel like with people there could be a lot of judgment, but with a dog, it’s just someone you can talk to where nothing bad could happen. For reading specifically, a lot of kids are shy or slow readers (for example), but when reading to a dog, (they) feel a lot more comfortable.”
While Copper is technically Ganeshan’s pet, Moore said, “I never considered (police dogs) as pets; I consider them as anything I’m wearing, a piece of equipment. I didn’t want the attachment because for me to put them in harm’s way. That would be difficult if my buddy got hurt under my handling.”