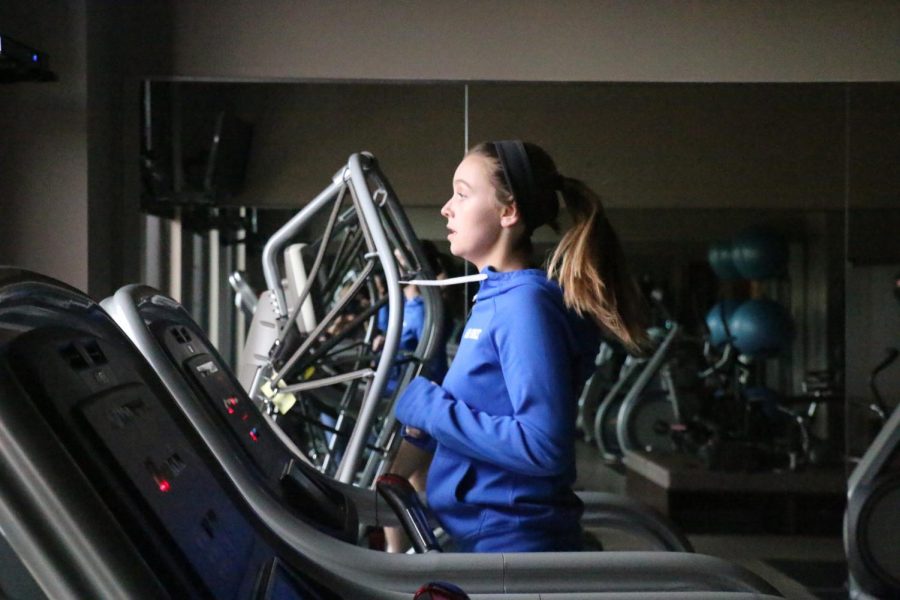 Junior Lindsey Thole runs on a treadmill. Thole typically begins workouts with a walk and then a one or two mile run. She said running helps improve her endurance.

ROTC is a college-elective-styled program offered at many American universities that aids students in gaining the technical and leadership skills needed to be commissioned as an officer in the Army, Marine Corps, Navy or Air Force. The courses offered cover various components such as physicality, leadership, military science, strategy, communications and data management. While all who graduate from the program are named Second Lieutenants of the Army, they must serve full-time active duty or part-time reserve duty.

Students can join the ROTC while pursuing another field of study for their civilian career. In addition to providing health care and vacation time, the Army will pay in-state tuition, living fees, allowance and book fees for public schools after service. “(Being in the Army) is something that I don’t think of myself as being in. A lot of people are surprised when I tell them,” Thole said. “I know that after I go, I’ll be really proud that I did it. It’ll give me a sense of confidence that I was able to put myself through that and help my country. It’ll push me out of my comfort zone and I’ll gain a lot from personal development.”

Ralph Vargas, recruiting operations officer (ROO) of Indiana University Army ROTC, said the program serves as a starting base of calculated technique progression to ensure all students are fully equipped with life-long skills such as fostering motivation, teamwork and passion. He said the program will guarantee students leave with the confidence to pursue any career they see themselves succeeding in.

“Students at IU ROTC learn tactical decision-making practices and problem solving from a class which covers it all: Basic Leadership Course A,” he said. “From our program, you can go to another school to learn how to fly helicopters or how to become a military intelligence officer

or finance accounting officer or an Army doctor or Army nurse.”

Similar to Thole, junior Caroline West said the many learning and growth freedoms encouraged in a nontraditional setting drew her to learn more about the program. West, whose father served in the Army, said the lifestyle she grew around was very engaging with many opportunities to express patriotism in different ways.

Both Thole and West said the ROTC program will equip them with the skills to oversee challenges in today’s world, whether they are personal or work-related, by using real world examples of modern situations in the learning curriculum.

“I think I’ll obviously gain more pride for my country, but I also think that the experience will make me more humble as a person, more of a teammate,” West said.

However, both said while the program seems easily attainable and valuable with its numerous benefits, students must be ready to present their best selves, for the Army upholds rigorous standards on physical fitness, time management, academic control and responsible alcohol use.

“If you’re thinking about going (to the program), start preparing for it now. It’s not something that you can just decide to do. You have to go through a process beforehand,” Thole said. “You have to plan to go; you can’t just go on a whim.”