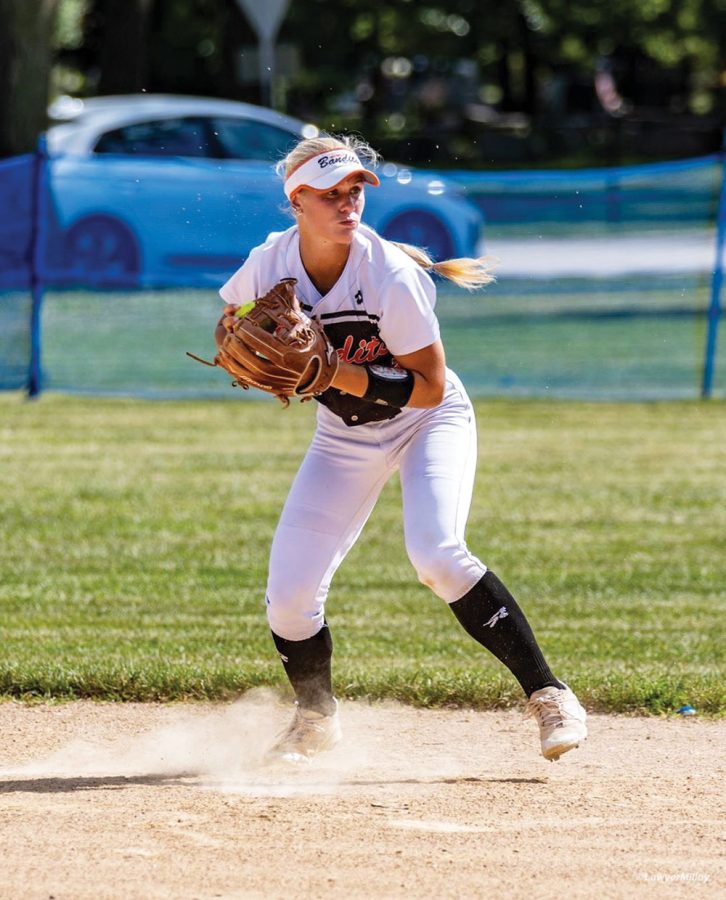 Senior Stormy Kotzelnick playing a game for the Beverly Bandits 18U Premier team. Kotzelnick plays second-base for the Chicago-based team, one of the best in the nation.

What are your accomplishments in softball?

Obviously, it’s been a super long journey and with that, there’s a lot of accomplishments I’ve done in my life, not just on paper, but even in experiences. I committed my eighth grade year to the school that I’m still going to, so that was a big accomplishment. I’ve been ranked basically top 10 softball player in the nation for a long time, and I was softball player of the year my freshman year. Honestly, outside of softball, there’s a lot more accomplishments that I’ve had like training other kids or just being a good face to the community and stuff. I was on the cover of one of the Carmel magazines, and that was a really big thing for me and a personal accomplishment, and I guess also what it means to me is being able to show a better example of what women athletes should be teaching other kids.

When did you discover that you were really good at softball?

When I was 13, I played softball and basketball, and that’s when I had to quit playing basketball to pursue softball, so that was when I really knew that this was something I wanted to do for a really long time and be successful in it. That was a turning point because I knew I liked it and I could be really good at it if I put all my time into it.

When did you start getting recruited, and why did you commit to the University of Washington?

I started getting recruited when I was in seventh grade. After that, I just kind of went on visits around the country to colleges that I was interested in going to school at. When it came down to my final choices, (University of) Washington was just really it because I love the coaches and the atmosphere, and I wanted to go to the west coast. There’s hundreds of reasons. People ask me all the time, “Why Washington?” There’s a lot of reasons that go into it; some people just really wouldn’t understand, but it really is like a family there and that’s what I enjoy about it.

What are your long-term goals with softball?

My long-term goal for softball is definitely representing USA. I tried out for the Junior USA Team this past December but like I obviously didn’t make it. That would definitely be one of my end goals is to represent the country playing with this team. It’s hard to say because I want to do it for a long time, but it’s not going to be a “career career” thing because it just doesn’t pay that well to my suffice but I’m going to do it as long as I can.

What impact do you think you’ve been able to have on the community through softball?

Probably just keeping girls in the game. Because so many girls now in this generation just, as soon as something gets hard, want to quit. They don’t want to work hard for what they want or desire or anything like that. I think I’ve helped the community just by teaching the younger generation what working hard is and what it does for you.

What would you tell other students about working towards and achieve their goals?

I’d probably tell them that nothing is going to be handed to you, and you need to go out and earn and take everything that you think that you need in life.