In the Top 1%: Academics 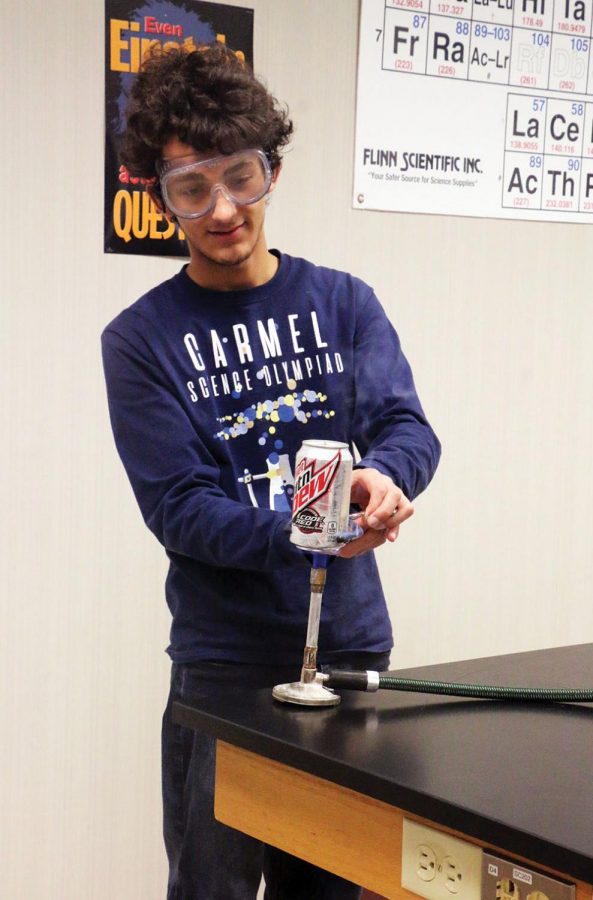 Senior Yannik Singh works on a chemistry experiment during Chemistry Club afterschool. In addition to the club, he also participates in Chemistry Olympiad.

What are some of your academic accomplishments?

Rising Star is a state-wide award given by the Indiana Association of School Principals. It’s awarded to the top four juniors in classes at most Indiana high schools, so I got that last year, along with a couple of other people here at CHS; I believe it’s only based on GPA. For Chemistry Olympiad, it’s a national chemistry competition taken by around 16,000 students from all 50 states. Basically what you do is you take a series of chemistry tests and it culminates in a very intense two-week study camp in the summer where you do a bunch of labs and take a bunch more super hard tests. I was one of the top six students in the competition this year nationally. For Science Olympiad, it’s another national science competition; It’s a little bit broader in that it focuses on every area of science and it’s a team competition, so our school has a team that we take to various competitions. In the past two years, I was on the CHS Team that won the state competition and competed at nationals, and then this past year, I also won first place in one of my events—which are kind of the sub-competitions within Science Olympiad—so that event was Chemistry Lab, and then I also won second in another event, astronomy.

What sparked your interest in STEM?

I guess what really got me into it was a chemistry class (outside of school) that I started taking my freshman year. This was before I actually really knew about any of these competitions, but there was just this class that I knew of and we basically just talked about chemistry and did chemistry problems. I thought it was really interesting because you start to see how things work on a molecular level, and the understanding that you gain is cool because you can see chemistry all around you in your daily life, so I thought that was kind of interesting. That’s how I started getting really into that, and then that kind of just spiraled into all of STEM.

What advice would you give other students on achieving their goals?

The first thing that I would say is make sure that what you’re working toward is something that you actually want and you’re not just pursuing it for prestige but because you actually enjoy the subject, because usually if you’re interested in the subject, no matter what, you’re going to succeed in something related to that area unintentionally because you’re going to be so interested to learn more about it. So I guess once you’ve checked that off, after that, the big thing is having plans. Last year, for example, when I was preparing for this Chemistry Olympiad competition, I really had pretty much an hour-by-hour plan of what I would be doing and I made sure that every single minute was utilized to its fullest.