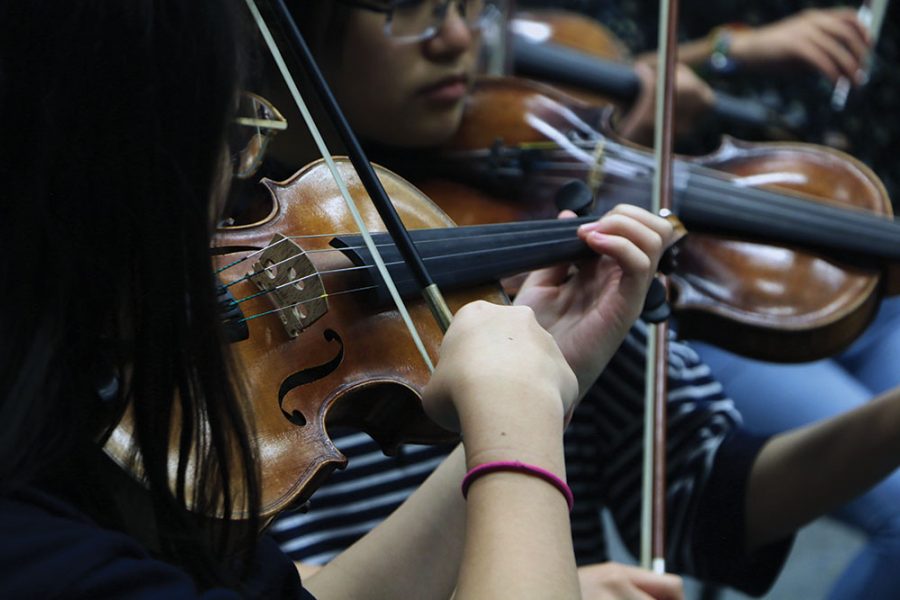 Sophomore Joanna Lee plays the violin during Symphony Orchestra. She said that although her brother was also a musician, orchestra is one way she is able to stand out from her brother who participated in band.

Living in a family of five, sophomore Joanna Lee is the middle child, stuck between her older brother in his second year of college and her younger brother in seventh grade. Like most students, Joana follows the typical routine: eat, sleep, school then repeat. When school is over, she attends academic superbowl meetings, orchestra council meetings and after-school practices for Symphony Orchestra. Outside of school, Joanna competes in piano and violin competitions, helps tutor at her church and plays tennis. But is it enough to be unique in her family?  The answer is not so simple.

Joanna said she seems to always live underneath the expectations of her older brother’s accomplishments. She said her older brother achieved a lot before he entering college. He received mostly A’s throughout high school. He was also involved in a lot of athletics and earned a fourth-degree black belt at Master Yoo’s Taekwondo and was a member of a travel soccer team. His athletic and academic achievements are augmented by his musical skills. He played both clarinet and piano and was first chair various times in different bands, such as All State or CHS band. Joanna said her brother, on top of his extracurriculars and academics also somehow had the time to have multiple jobs.

“He always seems to effortlessly achieve so many things, but I guess he gets the most pressure from being the first child (in the family),” Joanna said. 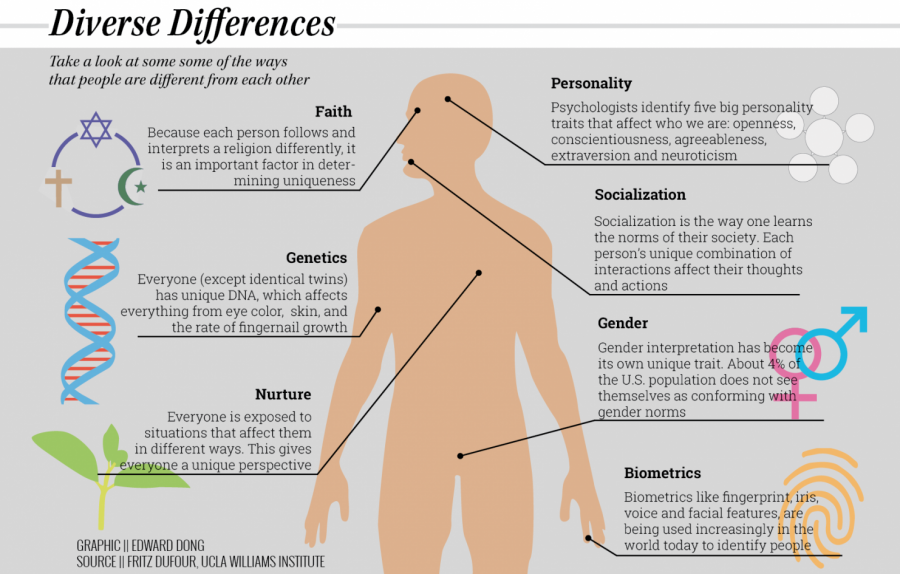 Along with feeling overshadowed, Joanna said there are some differences in how she is treated compared to her siblings.

She said, “As the middle child, I’m fine, I guess. I’m the only daughter,” She also said, “My younger brother gets to do a lot of things I was never allowed (to) at his age, so I constantly feel as if I have to do better to show that I still have something to show myself I can do things.”

On top of feeling all these expectations, Joanna explained that she felt she could show more of her potential if she started pushing herself with the amount of pressure that her older brother placed on himself and was expected to perform at by her family.

“I think it’s a matter of ‘what I’m doing’ and ‘what I can do.’ That is the difference between my older brother and I,” Joanna said. “To clarify, he’s always doing the next step while I’m doing only what’s put in front of me. I could show more (of my) potential if I start reaching for that next step.”

Sophomore Paige Stanton also faces a similar challenge of standing out in her big family of six. She said she is always trying to differentiate herself from all her older siblings because she is the youngest in the family.

“I always feel like I have to be as good or better than my siblings at things because if (I am not as good), I’ll be compared to them and then I’ll just feel bad about it,” Stanton said.

According to Stanton, there are a lot of misconceptions on how the youngest in the family is treated, how much attention they get and the expectations they face.

She said, “People always tend to think that the youngest sibling gets everything they want, but that is very wrong. My siblings always pick on me.” 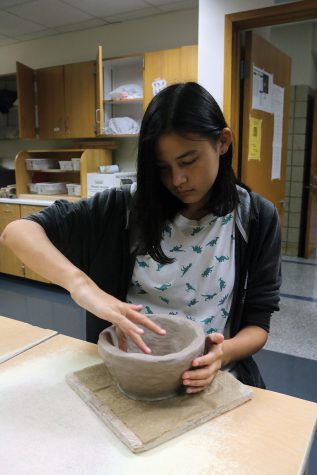 Natalie KhamisSophomore Paige Stanton works on a project for her ceramics class during SRT. She said she tries to explore and discover different activities and hobbies other than ones her siblings have participated in or a do different twist on their chosen activities.

She said she struggles with differentiating herself because her siblings treat her like she is really little and can’t do anything because she is the “baby” of the family. She battles to establish her own identity as an individiual apart from the childish characteristics that have been attached to being the youngest.

Because she is the youngest, Stanton feels she’s compared more than a middle sibling would be to her siblings because they have all passed through CHS before her.

She said, “It’s hard because my siblings are all good at different things and I’ll be compared to them (if i do the same things) or (people will) say I’m copying them if I do something similar.”

Jenny Lee, Joanna’s mother, said she experienced similar events to her daughter and Stanton during her youth.

Jenny explained, via email, that she grew up with three older brothers and two older sisters, making her the youngest in her family. Throughout Jenny’s childhood, she would often become sick, and her parents wouldn’t push her as much as her other siblings in school. In addition, being the youngest in her family meant she was unable to play a musical instrument because there was less money available for her. She said these differences in treatment weren’t limited to just her childhood, but also her teenage years because she was forced to go to the national college in her state for financial reasons.

She said that although she didn’t receive as many opportunities as her siblings, she didn’t feel they were competing against each other for their parent’s affection or recognition. Although her family was not able to provide the same experience to her as the rest of her siblings, her parents always gave her the same quality of attention.

She also said she never felt any anger or dislike towards her siblings for having a greater number of opportunities because they protected her.

“I have a funny memory that my sister told me (from) when I was younger. When I was little, my eyes were so big. A boy came to my house and he said (that) to my sister, and teased that my eyes were so big, (they looked like) big candy,” Jenny said. “My sister and three brothers all fought with his brothers and sisters (so they would stop teasing) me. My brothers and sisters have been good protectors (of me since I was young).”

Although Joanna said her brother sometimes makes it hard, she has found her own ways of being different and standing out. Stanton said she agrees and feels she has also grown in her ability to be confident and not always compare herself to her siblings and their accomplishments

Stanton said, “I just try different (activities) and see what sticks. An example could be that my siblings all do some type of art, my brother draws, my sister uses charcoal and mainly does shading, my other sister does zentangles, so I tend to paint or do cute, little doodles.”

She said that even though it seems like she is participating in the the same activities as her siblings, she actually finds her own niche and special interest.

Similarly, Joanna said, “Rather than doing what my brother achieved, I found different activities (such as orchestra, tennis and gymnastics) that I enjoy doing and therefore spend my time in.”

Joanna said that even thought these activities are similar to what her brother did when he was in high school, they are different enough that she isn’t compared to him on a daily basis. She is able to participate in activities that, despite being similar to her brother’s, are of interst of her and provide a fun outlet for her to express herself.

Having a similar mentality to her mother, Joanna said that she doesn’t feel any real competition exists between her brother and her to be the best in the family. If there is any feeling of competition, she said it would relate to academics or in a family-friendly manner.

She also added, “(My siblings are) my motivation sometimes.”

She said, “Even though I’m setting my eyes on (being different from my older brother in almost all aspects of my life), I really take inspiration from him and his accomplishments and hope to excel (in the future) like he does.”

Joanna said she is content in her current situation, and that doesn’t have a plan for the future to distinguish herself from her older brother. As of now, she just wants to enjoy participating in activities that interest her. She said she feels that she still has a lot to achieve musically and academically but reminds herself that “it’s okay to not be the best.”

“I’d like to say that I am very unique from my brother,” Joanna said.