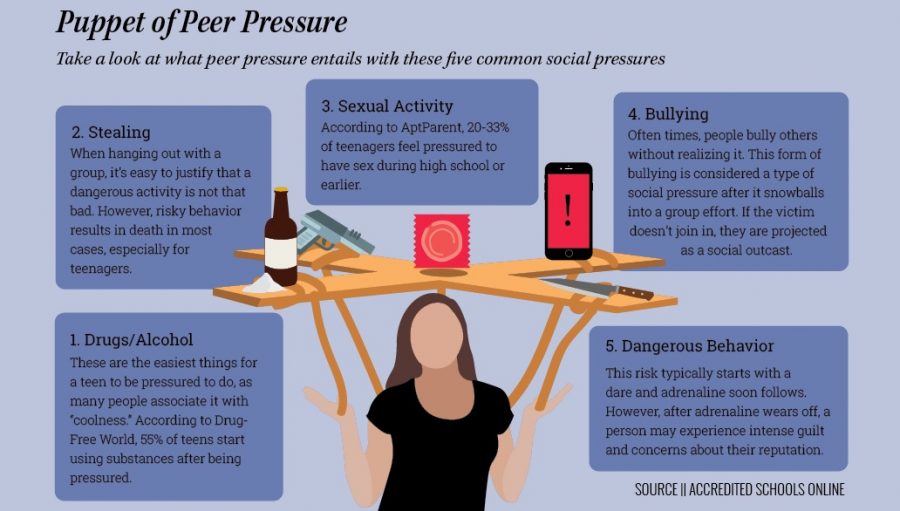 In many modern TV shows and movies, high school is portrayed as the period for students to find themselves and their values. However, for junior Katelyn Wang, the peer pressure she said she feels is not as intense as what is portrayed in the media.
According to Wang, the abnormal size of CHS has its downsides and benefits, but ultimately, it is not as exclusive and cliquey as modern media makes high schools seem.
“Sometimes, (at CHS) you can feel like just a statistic. Sometimes, you can feel like a number,” Wang said. “Really, if you get down to it, the amount of people helps you learn about people in general. Stereotypically, yeah, there are jocks and there are nerds, but it runs deeper than that.”
But if you pay attention, sophomore Mansi Nayak said there are more apparent stereotypical divides in the environment if one chooses not to ignore them.
“You’ll often see the popular kids stay away from, you know, people who play video games,” Nayak said.
Finding a Voice
Nayak said accepting yourself for all your interests and flaws is a gradual journey.
“I feel like, maybe, the people who don’t speak out (have the hardest time being themselves). I’m one of those people,” Nayak said. “I don’t like speaking out unless I have a lot of my friends in that class. So, it just gets really tough.”
Counselor Ann Boldt said tension among students is prevalent at CHS but it is different in the sense that it is often a comparison of academic ability rather than social standing. She said the typical high school stresses about grades and the future can mix with unrealistic social standards students set for themselves.
“Everyone thinks all the students here know what they’re going to do with their lives and what they’re going to major in. That’s not true nor should it be,” Boldt said.
Wang said self-reflecting on what truly matters to her helps her lessen anxiety about cliques and judgment in the academic and social worlds.
“I think what people have to realize is if someone doesn’t like you, that’s their problem. It also goes the other way,” Wang said. “If I don’t like someone, that’s my thing. It’s not their fault. I don’t get to treat them like it’s their fault.”
Boldt said it is important for students to realize each journey is specifically unique to a person’s personal and academic capability.
“(School) doesn’t look the same with any one student and I think the biggest thing is people are comparing themselves,” Boldt said.
Wang also said peer pressure has been so institutionalized that it impacts regular social etiquette.
“I think we look at peer pressure and we think it’s someone pressuring someone to have sex or to try alcohol or drugs or to do a crime. I think it’s less about that and more peer pressure in terms of this is how you should act,” Wang said. “You should be nicer to people. You should be less sarcastic. You should be less loud. I have a pretty loud personality. I scream in hallways and people shun me and look away. I have no volume control and I’m not going to apologize for that.”

Media Gets It Wrong
As for high schools portrayed in the media, Nayak said while cliques and peer pressure are present at CHS, it is not as intense and detached as today’s TV shows and movies make it out to be.
“I don’t think the entertainment industry should exaggerate it as much; they might show us more of it,” Nayak said. “They need to talk more about how normal school life is. I just don’t think that’s being represented.”
Nayak said the distortion of high school in the media gives people false ideas of how they should act. She said the interactions at CHS are simplistically casual and well-intentioned.
“I don’t think there’s anyone who’s the most popular here or the most bullied here,” Nayak said. “It’s all pretty well-balanced.”
Wang said she agreed with Nayak about how each person at CHS is so different that it seems like cliques aren’t as integrated as they are displayed in the media.
“One clique doesn’t fit one person,” Wang said.
Wang said when TV shows start showing multifaceted characters in diverse, realistic situations, students will come to realize acceptance is the easiest choice.
“I think there’s not one person that’s been nice 100% of the time his entire life. I think there’s a lot of people who have been mean,” Wang said. “I think a lot of times when you have this main character who is this nice person, this pretty girl with a boyfriend and all these problems but she herself never recognizes she was the villain of the story, it makes this unrealistic stereotype that this girl is always good and this girl always does this right.”

Finding Your Part
Boldt said while each student makes their own contributions to CHS, it is important to realize the impact you can make on yourself with the available resources.
“Make your journey here at Carmel High School your own,” Boldt said. “Just do things that bring you joy and you have passion about.” Wang said CHS supports progressive, real connections that leaves students for the better.
“While I do feel like people could be nicer sometimes, I think that the idea that all high school football players are bullies or all high school nerds are just nerds and can’t look pretty (is not true),” Wang said.
Wang said the size of CHS ultimately results in more relations and learning opportunities.
“The whole point of bullying and people being rude to you and peer pressure is to say ‘Okay, you can pressure me to do it. You can be mean to me. You can completely ghost me from your group and everything,’” Wang said. “It doesn’t matter because I promise you if you look around (CHS), there are 5,000 people here. You are going to find one person here that you click with well and that you love.”