Dare to be Yourself 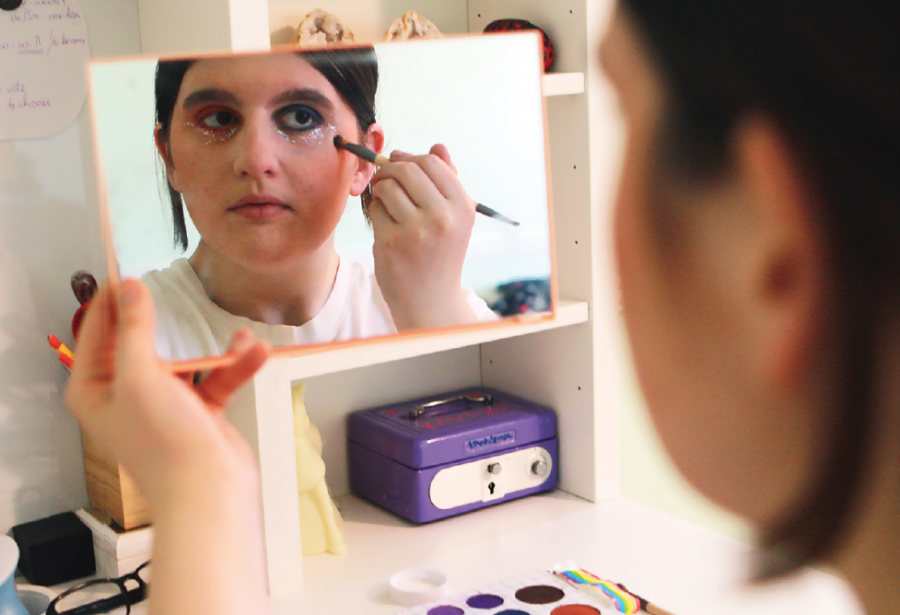 Sophomore Kaylee Gingo does her makeup in the mirror, incorporating bright colors to show her pride. She said, “There are some stereotypes that I find in the clothes I wear but otherwise my identity doesn’t really affect my expression."

A 2017 Gallup poll estimated that a total of 4.5% of American adults identified themselves to be part of the LGBTQ+ community, up from 3.9% in 2015. In a follow-up study from the Williams Institute at the UCLA School of Law, researchers found roughly 11.3 million Americans were part of this community. Junior Bradley Snyder is part of these numbers as he said he is open about his orientation of being gay.

“Being gay is one of the more commonly know identities within the LGBTQ community and essentially that just means I identify as a guy and I’m also attracted to other guys,” Snyder said.

For Snyder, his realization didn’t happen until in middle school when he said he related to several YouTube creators who identified themselves to be in the LGBTQ+ community.

He said, “I’ve heard a lot of people talk about knowing (who they truly were) from a very young age, but quite honestly I think when you’re really young you don’t really think about who you are sexually attracted to, so those thoughts didn’t really come to me until middle school.”

However, sophomore Kaylee Gingo, who said she identifies as lesbian, said she first discovered she was “different” from others when she was in fourth grade.

“In fourth grade, I started realizing that I was different than other kids in the way that I saw girls prettier than I did (with) guys,” Gingo said.

But regardless of when they, themselves, realized their identity, Snyder said the overall process of “coming out”–a term used to refer to people who disclose their sexual orientation/gender identity to others–takes much longer.

“I think something people don’t realize is that (coming out is) a long process because you’re constantly having to come out with people who don’t know or assume that you’re straight,” Snyder said.

For Snyder, the process of coming out was relatively smooth, partly, he said, because of his environment.

“I recognize the privilege I have to be able to come out because (of) my family. (They are) really supportive and also my friends are really supportive,” Snyder said. “So far for me, it’s been easy and I’ve gotten a lot of support and it just felt necessary to speak my truth.”

Gingo, on the other hand, said when she was beginning to learn she was different, she faced a stage of denial in fear of what her parents would say; however, her parents came to fully accept who Gingo is.

“I didn’t come out (to my parents) until a couple months ago,” Gingo said. “My dad didn’t care at all (as) he’s from New York (and) not too focused on that; he just wants me to be happy. My parents both accept me now and understand that I’m different but should still be treated the same way they’ve always treated me.”

Suzanne “Suzi” Brown, English teacher, sponsor for a CHS transgender support club and ally of the LGBTQ+ community, said she believes in allowing people to be who they are and supporting them and loving them no matter what.

“I often see people whose parents aren’t necessarily very supportive, so (students are able to talk at this club) and ask questions about things that they don’t get to ask at home and it’s funny because I can see (those students) get to be themselves and they’re so happy (about it),” Brown said.

One positive aspect about coming out in Carmel, according to Snyder, is the diversity among people. He said the general community, and especially students at this school, accept the differences individuals have.

“In my experiences, a lot of students (at this school) have been really accepting, even more so than the average adult that lives in Carmel,” Snyder said.

Gingo said she agreed. According to her, coming out at CHS can feel natural as many people feel comfortable or don’t pay much attention to the topic.

She said, “I feel like (CHS) in particular is really accepting,” Gingo said. “We have a lot of different people at (CHS), so I feel like a lot of people will accept you and they won’t really care.”

Brown, too, said she felt the diversity and acceptance in Carmel makes it more comfortable for people in the LGBTQ+ community.

“There’s a lot more diversity here (in Carmel) than in some other places. I mean, where I used to work, it was a very small farm community (and) there wasn’t a lot of diversity and it was pretty conservative (too),” Brown said. “Carmel feels way more like home to me…. there’s a lot more culture here. You’ve got a lot more clubs that celebrate differences and celebrate heritages and history and I think that is why if the school models that behavior (of acceptance and diversity) then the (students) pick up on it and it’s, you know, expected.”

However, according to Gingo, there are still individuals who aren’t necessarily open to the idea of other people being part the LGBTQ+ community. But she said, despite having friends who don’t agree with her lifestyle, they still support her nonetheless.

“I have a couple of friends who don’t really, I guess, agree with homosexuality but, at the same time, they know I’m happy and if I’m happy then that’s best for me,” Gingo said.

Snyder, however, said he had an opposite reaction from his friends when he slowly came out to them.

“I think maybe I’m just lucky or I chose my friends wisely, (but) I can honestly say, none of my friends have ever been rude or disrespectful to me based on my sexuality,” Snyder said.

According to Brown, even if teachers don’t agree with individuals identifying themselves as “not straight,” it doesn’t excuse themselves from performing their job.

Regardless of the struggles LGBTQ+ students may face, Snyder said after coming out to his parents, he became more comfortable to be himself around his family.

“With (coming out) to my parents, there was definitely a difference in the sense that I just feel a lot more comfortable being myself around them,” Snyder said.

Gingo said she felt a similar experience when she came out to her parents.

“Honestly, I think, hiding (who I truly was) and not being honest made it a lot more stressful,” Gingo said. “For me, personally, since I have (come out), I feel like I’m being true to my parents.”

After the long process of coming out, both Gingo and Snyder offer similar pieces of advice for students who are struggling with who they are.

“My advice would just be (to) take your time; everyone’s journey is different and obviously, don’t (come out) if you’re not in an environment where you feel safe,” Snyder said. “But I truly would say that once you do (come out), in most every case, you will feel better and you will start to feel more confident in yourself and you won’t have to fear (that) you’re trying to be someone that you’re not. And obviously, in life we can never relive or like get back these years, and so, as soon as you can start living your life, honestly, (it’s) always going to be better.”